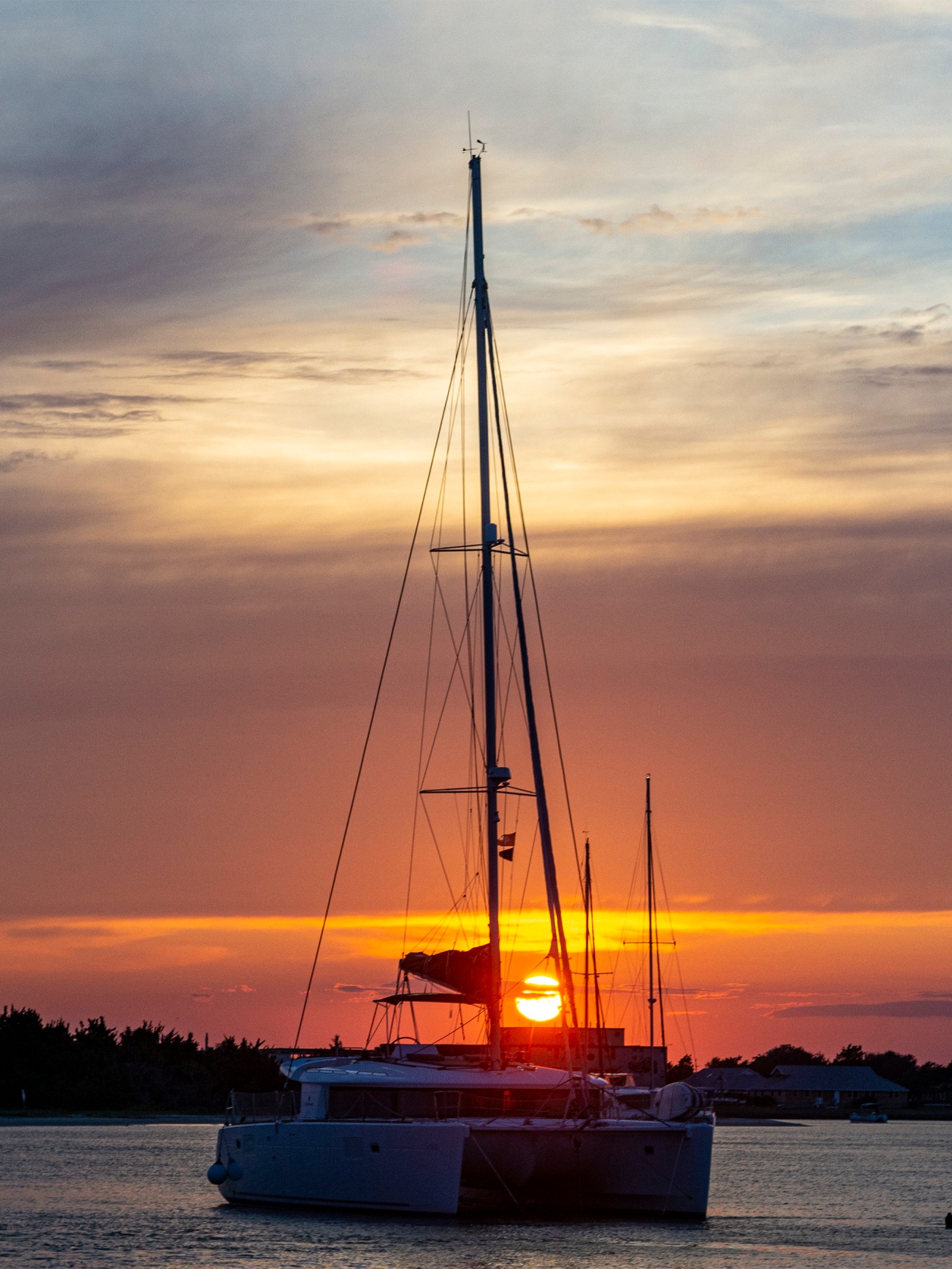 For the last weekend in July, the weather was perfect.  The first 3 weeks in July it been hot and humid in Eastern North Carolina.  A cold front push down from Canada and brought cooler temperatures and lower humid to Eastern North Carolina.  The lows for the weekends were forecast to be in high sixties.  The daytime highs was mid-eighties.  It felt more like late September than the dog days of summer. It’s looks like a nice weekend for a sailing trip Cape Lookout.  I asked my sons if they wanted to accompany me on Friday for a weekend gateway.  Raymond was busy with his friends, but Daniel was up for it.  So I kept a close eye on the weekend weather forecast.  I usually don’t get underway during small craft warning, but we did this time.  It was a rough ride crossing the Neuse River on Friday afternoon with 20 plus knot winds with a 2 to 3 foot chop.  On Thursday morning, the marine forecast called for small crafts advisory  (small craft warning) until 11 AM on Friday.   On Friday morning, the small craft warning was in effect until Friday night.  Originally, I was planning on getting underway by 6 AM Friday.  High tide in Morehead City was at 3 AM. I wanted to travel down the ICW (Intracoastal Waterway) with the tide going out.  When the forecast changed and small craft warning was in effect until Friday evening, it would be better to leave at 3 PM at the next high tide in Morehead City.  We got underway at 3 PM actually and we checked the marine forecast again before getting underway, now the small craft warning was in effect until late Saturday  night, unfortunately Cape Lookout was out of the pictures.

They were calling for 6 foot seas at the Bight (Cape Lookout Bight).  In geography, a bight is a bend or curve in a coastline.  It typically indicates a large, open bay, often only slightly receding. It is distinguished from a sound by being shallower.  Daniel had a Hockey Playoff game on Sunday, so we had to be back early on Sunday or late Saturday.  We decided to anchor in Taylor’s Creek in Beaufort, North Carolina.

When we arrived at Taylor Creek, there were several vessels already anchored.  This only my second time taking my sailboat to Taylor Creek.  I noticed none of the other vessels had a scope.  A scope in anchoring is defined as a ratio of the length of an anchor rode from the bit to the anchor shackle and the depth of the water under the the bow of the boat measured from deck height.  Usually, for calm overnight you would use a 8:1 ratio, for strong winds and current you used a scope 12:1.  The wind was blowing at 15 plus knots and there is 6 knots current in Taylor Creek, so we put out 10:1 ratio.  Which happen to be a mistake.  On Saturday morning, when I woke up at 5:30 AM (High Tide was at 03:30 AM), something didn’t look right.  My boat was not in line with anchor line.  We were at 45 degree angle and a ground.

I tried motoring my way off the beach which didn’t work.  Then I tried motoring and using windless to pull vessel into deeper water. My sailboat has 4 1/2 feet draft and I was in 3.7 feet of water.  I called Tow Boat USA, which I am a member and had them pull off the beach and into deeper water.  If it wasn’t for getting aground, it would had been a perfect sailing adventure.  The sunset was gorgeous.

After breakfast, Daniel and I went kayaking in Taylor Creek.  First we paddle against the current for a hour, and then we had 15 minute ride back.

Here is summary of the trip, from Whittaker in Oriental to Taylor Creek, it took 4 hours and 34 minutes.  We travelled a distance of 22.5 miles.  Our maximum speed was 7.2 knots and our average speed of 4.9 knots (motoring to Beaufort with the tide going was helpful).  On the way down at the junction buoy, we took the route for Town Creek.  The tide was going out, so there was enough water to motor down that channel.

On the way back from Taylor Creek to Oriental, we took the long way around Radio Island. The distance on the way back was 24.3 miles.  It took 5 hours and 32 miles.  We were averaging 4.2 knots.  We had a hit a maximum speed of 7.5 knots.  On Saturday afternoon, small craft warning was in effect of the Neuse River.  The wind was blowing at 18 plus knots out of the Northeast.  When we got to spot in Adams Creek, where you are not heading Northeast (into the wind), at nun buoy 8A, we killed the motor and sail the rest of the way to Oriental.  When we got out of Adams Creek and started our tack to Oriental, we reef the main and started keeling at 20 degrees.  We were making 6 plus knots.