Why is it, when where a full moon or celestial event, it’s rainy or very cloudy.  On April 12 and 13, there will be the 7th Annual North Caroline Statewide Star Party.  There are calling for overcast sky for the weekend, so it might be a washout.  I went to the my first meeting  at the Crystal Coast Stargazers, it is a local group of amateur astronomers and photographers that formed in 2016.  They have over 40 active members participating the group activities such as monthly dark skies observation, public workshops, and other outreach programs through the Fort Macon State Park and Cape Lookout National Seashore.  The meeting are on the 1st Wednesday of each month.

Because it been raining a lot, on Wednesday (April 10) it was a perfect spring day.  The temperature was in mid-70’s, and the Northeast wind brought clear skies.  I decided to take my puppies to the beach.  Yes, I have 2 dogs and only take pictures of one of them.  The oldest is camera shy.

It was Spring Break for Harley.  The water temperature was a chilly 63 degrees, but she didn’t seem to mind.  She loves fletching the ball at the beach.

I used my Nikon D7100 camera with the Nikon Nikko 50mm f/1:18G lens for the sunset at Atlantic Beach. 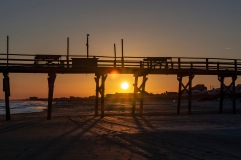 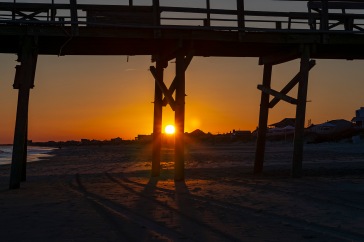